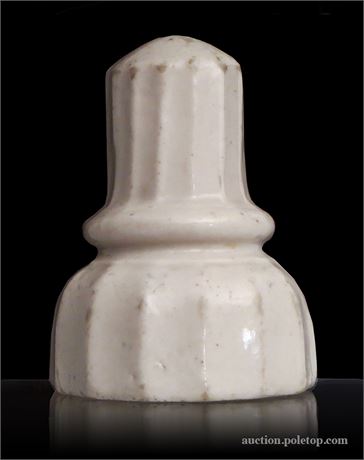 Paneled pilgrim hat.  A very impressive, large threadless insulator,  invented by E.B. Elliott.  They were produced by the United States Pottery Company in Bennington, Vermont during the early to middle 1850’s.  These insulators are extremely durable, as they are made of flint, feldspar and other substantial materials.

They have been found in the Maritime Provinces of Canada, especially in eastern New Brunswick and on Prince Edward Island, where they were employed on a very early telegraph line.

The “Elliotts” were possibly the earliest insulator produced in America with what could be termed an “inner skirt.”  There is a well pronounced, deliberate attempt to form a raised ring between the pinhole and base.

Second image shows an illustration depicting a display at a 1853 trade fair, housed at the Crystal Palace in New York City.  Various types of "Elliott" insulators were included among the products manufactured by a pottery in Bennington, Vermont.

An impressive and historical gem from the infancy of the telegraph industry.