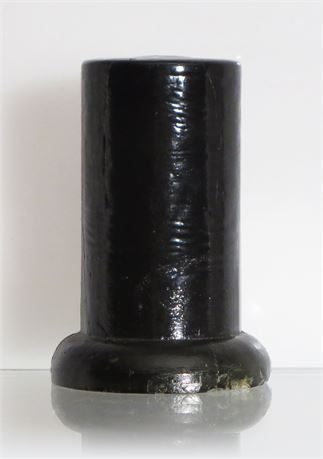 Milky opaque impurities drape through the glass, revealing a jade-like appearance when viewed in direct light.

Insert for a wood covered insulator, similar to the larger, wooden covers used with  "Wade" insulator.  Some of this type insert was used in conjunction with the "Chester iron ring" which fit around the wire groove of the wooden cover, having three alternating fingers" which gripped the line wire instead of using a regular tie wire (see third image).

This type insulator was used at a limited number of locations in Canada.  All we have confirmed came from the province of Ontario.

Pencil eraser diameter surface flake on the flange.  Quite nice for this type insulator, as many get damaged due to the thin, fragile glass and harsh northern winters where they were used.  Tough to find them in this shiny, nearly undamaged condition!

Plunkett Family Collection.  Purchased from Norm Banks, who found it along the Great Western Railway in Ontario, Canada.