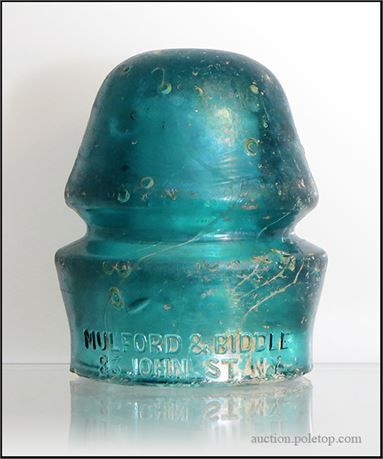 Produced by an unknown glasshouse in the middle to late 1860’s for Mulford & Biddle.  All examples with a confirmed provenance have surfaced in New Jersey.  Although the Mulford & Biddles 1865 advertisement in a telegraph trade paper only mentions they were a “manufacturer” of telegraph wire, they apparently also offered other telegraph supplies, as evidenced by this type threadless insulator and the 735 units which also carry their name.

Recently surfaced at an auction in East-Central Pennsylvania with some old bottles and a few other insulators.  An attempt to trace the origins further proved fruitless, so it's unknown if the insulator was used in that area, or if it travelled from New Jersey (where most known examples have surfaced).

An item which rarely surfaces for sale, and when it does, it often has chipping or flaking that removes part of the embossing. An exception to the rule, this gem has completely intact, well defined embossing.

Numerous surface fish-eyes, as seen in the photos, and some high point wear on the wire ridges.  A dug item, there's a rainbow-like, "iridized" effect on the cloudy surface.  No chips at all.... which is seldom encountered in this type insulator