Pole Top Discoveries will be conducting multiple auctions this Winter!

Please check back for more info as the auction dates approach. 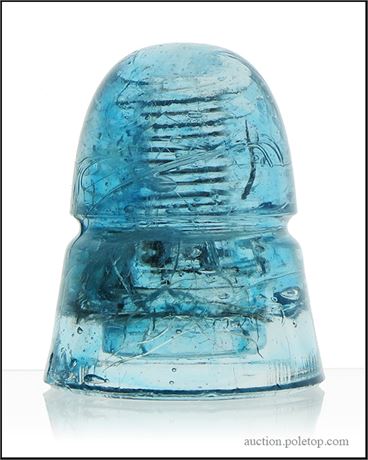 A highly unusual mix of colors!!!!  A color mix that we've never encountered in an HG Co beehive before!

Portions of the glass are colorless, with electric blue swirls throughout.  The streaked color separation can be seen in various areas of the insulator, but most obvious in the skirt (see third photo). This characteristic has been seen in a very small number of CD 162 HG Co signals, but not in a beehive.

The color mix created incompatibility related stress in the glass, thus resulting in numerous internal fractures at various locations of the insulator.  No chips, and only a half pinkie nail base flake.

Update: 12:40 P.M. Wednesday, December 8.  Many of the fractures mentioned above remain close to the surface, while others penetrate 1/3 or 1/2 way into the glass thickness.  A through-fracture does encircle the wire groove all the way around, and another through-fracture goes from the wire groove to top of the dome (visible if the insulator is turned to just the right position).  Most of the fractures are only moderately visible, then become more noticed if the insulator is turned in hand to reflect light.  The three images included in the original listing should show all sides of the insulator to determine an accurate appearance.  This item is extremely difficult to describe.... in the event the purchaser is not totally satisfied, it is fully returnable.