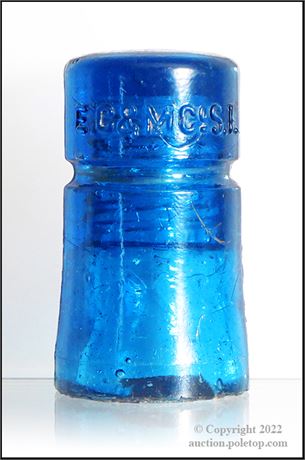 "Arizona Blue" is a color name coined by insulator collectors to describe this distinctive blue coloration found in a small number of EC&M's used on the US Military Telegraph network in the state of Arizona.  Materials, including wire, instruments and insulators for the communication network were purchased from the Electrical Construction & Maintenance Company of San Francisco.

The network traversed from San Diego, California, staying close to the border with Mexico, to Yuma, thence to Maricopa Wells, where the line split, on leg going to Prescott by way of Phoenix and Wickenburg.  The other leg from Maricopa Wells went to Camp Grant, by way of Florence and Tucson.  Once reaching Camp Grant, the line split again, one fork going north to Fort Apache, the other headed southeast to Fort Bowie and into New Mexico.

This Arizona blue example and three cobalt blue EC&M's were recently discovered in an old box by a couple living in Arizona.  The lady's father, who passed away at the age of 99, is believed to have found the four insulators during the 1950's, when he did a lot of exploring and some logging in the general area of the military telegraph line.  By the late 1950's he moved to another area, some distance from the military line.  However, by coincidence, he moved to an area that just so happened to be in the vicinity of another communication line that had been constructed with materials salvaged from.... none other than the U.S. Military network!

This bright blue beauty remains in quite nice condition, especially for an EC&M.  Very minor surface blemishes includes to match head marks on the dome corner and a minor surface scratch on the reverse skirt.  Shallow base flake is only half fingernail size.  Base bruise (no glass missing) can be seen in the first photo.  Every minor detail is being described since this is such a rare and valuable item.  Aside from the base bruise, it could accurately be called "very near mint."

Very few Arizona blue EC&Ms are known. Of the few that exist, this is among the nicer condition.

Third image is a portion of an 1879 map showing the US Military Telegraph system.