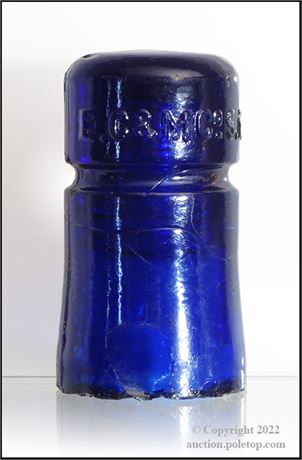 This flared skirt mould variant with rounded dome has been designated as mold type “A.”  Flared skirt variants were placed in service during the early years of EC&M production. The Electrical Construction & Maintenance Company was formed in late 1870, and production of the embossed “A” mold EC&M’s likely commenced shortly thereafter.  Cobalt blue examples were used in several different locations, most surfacing in California, Nevada and Arizona. A few have been discovered as far north as the state of Washington and British Columbia, Canada.

Perhaps one or more glass houses producing blue soda bottles in the 1870's in the San Francisco Bay area might have used the same glass batches to manufacture insulators.  These rich blue beauties can be found in varying intensities and depth of color, this one being an exceptionally dark, vibrant example.  The coloration is so intense, purple tones are present!

This jewel, along with the the Arizona blue example (Lot #2096) were discovered by a gentleman decades ago in Arizona, possibly in the 1950's.  He recently passed away at the age of 99, and these beauties were found in an old box in his garage.  Decades ago, he lived in the general vicinity of the US Military Telegraph line constructed in Arizona.   Materials for the line were ordered in 1873 from the Electrical Construction & Maintenance Company located in San Francisco, California.

5¢ size chip, up from base on front skirt (see third photo).  Reverse has a fingernail width, shallow flake on the skirt, up from the base.  Also a half pinkie-nail, dome corner flake and associated fingernail ding (see fourth photo).  Shallow base flakes.