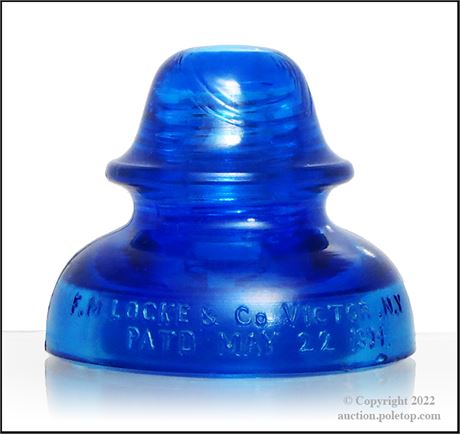 A colorful, power glass insulator made for Locke by the Hemingray Glass Company.  Limited numbers have been found, the majority recovered in the Grand Rapids, Michigan area decades ago.  A small number of the peacock blue units were also found in Texas.

Entire insulator remains in exceptional, sparkling condition, except for a very shallow, surface chip on the reverse skirt (as outlined in second photo).

First photo is dark, having somewhat of a cobalt blue appearance.  Actual insulator is the bright peacock blue coloration these are normally found.

Third photo shows the wonderful condition of the base and inner skirts.  The red arrow points to the edge of the shallow, flat skirt chip.

The fourth photo is another view of the reverse skirt.  The chip is quite shallow.  An index finger, from the first knuckle up, fits perfectly in the chipped area, indicating an accurate comparison of size.