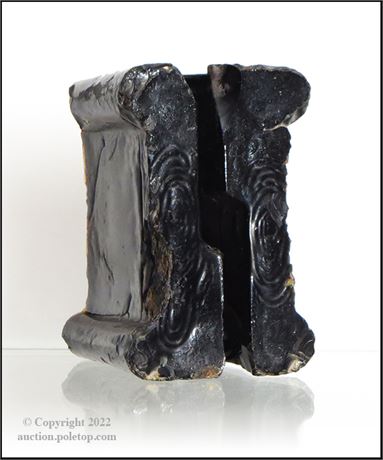 An exceptionally dark example.  Perhaps the only example known in this color.  If not unique, it's certainly quite rare.

Several variations of the “block” style insulator have been found, dating primarily from the 1840’s to the 1860’s.  They were used on two, and possibly three lines which connected the northern states with the Gulf region of the US during the 1840’s.

Some were also installed on lines constructed during the US Civil War in the 1860’s, but it's unknown if they were of new production at that time, or if they were reused from earlier installations.

Anyone attempting to assemble a large color run of blocks, or desires to have three or four choice colored examples, this is a highly contrasting, rare one to pursue!

The majority of colored blocks now in collections were discovered inside a railroad building in The Gallatin, Tennessee area many decades ago, this example among the amazing discovery.

Typical, shallow flakes along the sharp edges. Thumbnail size, shallow flake type chip down from top edge.  Another is about half that size.