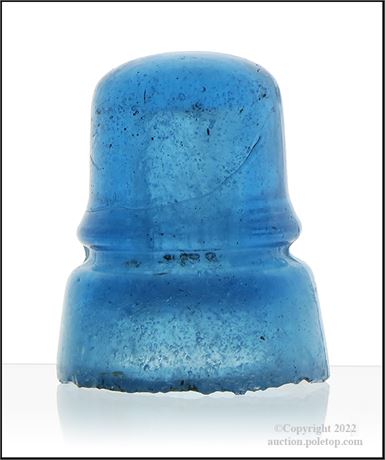 The glass is loaded with thousands of tiny bubbles throughout, creating a semi-jadelike appearance.  Exotic blue examples produced with transparent glass are seldom encountered and highly sought by collectors.  With the added added fizz, this unique jewel should eagerly pursued.

Embossed on the base, with lettering for the Montreal Telegraph Company.  The Montreal Telegraph Company was organized in Montreal in 1847.  The company expanded its territory with time, and by 1872 had 20,000 miles of telegraph wire in operation.  Lines crisscrossed all areas with  mentionable population all through eastern Canada, ranging from Ontario to the eastern Maritime Provinces, and into some northern States of the U.S.

Great condition, especially for this damage prone style.  Has only a little shallow flaking at the base edge.  Embossing is fully intact except for the "O" which was removed by a shallow, pinkie nail flake.

Formerly in the John Dorge collection.  When John passed, his wife gifted it to Cecil Boos, where it has remained in Cecil's collection since the mid 1990's.

Update: 12:25 P.M. Sunday, February 20.  Third photo added, depicting the base.  The arrow at right shows the small flake that affects the "O." The arrow at left points to an area 1" long that is flaked from the outside edge, to near  (but not including) the raised ring on the inside edge of the base.  The base is thin and quite tapered, so from the outside, the glass removal goes up 1/8" from the base edge.