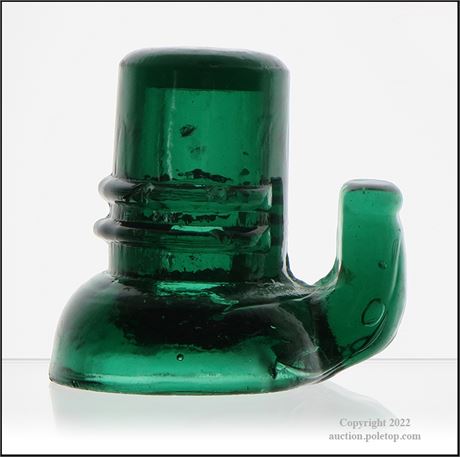 A fabulous, totally transparent color that passes plenty of light throughout the entire insulator.  Much lighter dolor density than is typically found in this item, making it exceptionally desirable.

Known as the large “Teapot” threadless. One of the most unusual insulator designs from the threadless era, and considered by many collectors to be at or near the top of the list of most desirable threadless insulators. The purpose of the spout has intrigued collectors for decades. Some speculate it was originally designed as a slack wire insulator, eliminating the need for a tie wire at each span. Some speculate the design originated during the Civil War, to facilitate rapid construction. Regardless of the original concept, these unique rarities are highly sought and seldom offered for sale.

The threadless insulators comprising porcelain U-990 and glass 790 and 791 are a highly unusual design, and have a mysterious background. The porcelain units were produced and used in the South.  Examples of the 791 "Baby Teapots" have been found primarily in southeastern Pennsylvania, where they were placed in service during the Civil War period.  Glass 790 teapots have been found in the South, typically in areas associated with Civil War military activity. For that reason, many collectors have believed they were used by the Confederates during the Civil War. However, there is mixed evidence on their origins, suggesting usage by both the North and the South during the Civil War period.

One of the earliest discoveries of 790 by modern day collectors took place in 1959. Dr. Sid Phillips and sons located a grouping of threadless insulators in the Mobile Bay area in 1959. Included in the group were a large variety of styles: 790 large teapot, U-990 porcelain teapot, 788 slashtop, porcelain U-989 slotted “milk bottle,” 701 egg, 701.5 large egg, 737/738 pilgrim hat and glass block. This discovery was on the east side of Mobile Bay, not far from Confederate military installations. Later, another collector discovered an example further north, reportedly on the battlefield at Blakely. Another was found near Spanish Fort, and at least one other surfaced on the west side of Mobile Bay in the 1970’s.

It would seem logical that most of the insulators discussed were used on telegraph lines operated by the Confederates to connect their military installations in the Mobile Bay area. There is documentation showing that the Confederates operated some telegraph lines in the Bay area. However, we must also keep in mind that Northern troops invaded and took control of portions of the Mobile Bay area in August 1864 and continued their advancement into early 1865, mainly the southern and eastern sections. The Northern force installed an impressive network of lines, not only in the Mobile Bay area, but all through the South during the war period. In fact, new line construction for military purpose in southern states during the Civil War was dominated by the U.S. Military Telegraph. The total mileage of new lines built by the North in Confederate States during the 1862-1865 period was many times greater than that of the Confederates.

The question of whether the Mobile Bay area 790 teapots were installed by the South or the North arises. Research indicates some of the lines using teapots in the Bay area were already in service and used by the Confederates when the North invaded. However, we must ask if perhaps the North, upon taking control of the area, rebuilt the lines with Northern supplies, including insulators. Adding even more mystery to the situation was the discovery of a 790 teapot during recent years in Mobile, Alabama. It was dug in a privy, several feet deep with 1860’s era bottles. The intriguing part... it was wrapped in a badly decomposed Northern officers uniform!

The April, 1865 image included above depicts a scene in Washington, D.C., showing a work crew in front of the U.S Government paint shop, part of a series of buildings used as repair shops during the American Civil War. An amazing view, the pole hosts three pilgrim hats, likely 737 or 738, and three 790 large glass teapot threadless (on long iron brackets)! An enlarged view shows the insulators in greater detail.  This scene verifies usage of 790 teapots by the North during the war.

Only one other large teapot has been encountered over the past several decades that's lighter than the typical dark coloration. Recent  investigation reveals it is darker than this beauty.  Could this colorful gem be unique in the hobby?

Great overall condition!  There's some wear on the surface where the spout meets the skirt (from wire movement).  Wire ridges have a couple match head flakes and another slightly larger.  Some shallow flakes up from the base on one side..... quite minor for this design.  Several attractive folds and creases in the glass might appear like damage in the photo... but are actually enhancements to the crudeness and desirability to this historic relic.  Wonderful condition for this design!!!