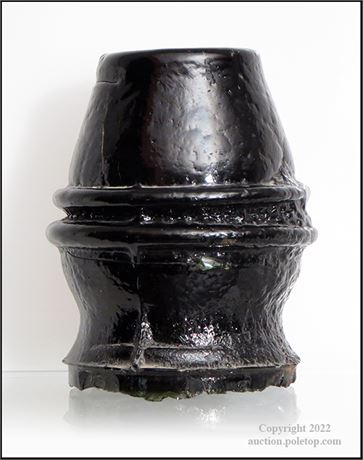 Known as the “Confederate egg.”  Discovered at a Richmond, Virginia construction site in 1990, near Mayo's Bridge which crosses the James River.  A quantity of these fabulous insulators were recovered from the site, which had been stored during the Civil War.

The city of Richmond, Virginia served as the capital of the Confederate States of America during much of the Civil War. Aside form the political power of the city, it was also an important industrial center for the Confederacy, with the production of weapons, munitions, and other supplies. Richmond was home to the Tredegar Iron Works, which was a vital supplier of materials which aided the Confederate cause, including munitions, armor plating for use on iron clad ships, and even steam locomotives.

Despite repeated battles in Virginia during the Civil War, over a period of years, the Northern forces were unsuccessful in occupying Richmond until nearly the very end of the war, in April, 1865.

When Confederate forces and government officials within the city recognized that Richmond was about to fall, they evacuated the city on the night of April 2, 1985. A sizable portion of Richmond was in flames at the time. Civil War scholars debate whether the fires were intentionally set, or if they were mostly accidental. Some claim the burning was intentional to minimize the amount of usable goods that would be left for the Northern troops. Others theorize fires got out of control when munitions plants and other strategic locations were intentionally destroyed.

Regardless of the true cause, the fires devastated a once beautiful city, leaving behind large sections of charred ruins. The scene above depicts Richmond in flames as residents, officials and troops evacuate.

In 1990, a construction project in Richmond was taking place. Good fortune was present, as the excavation was on a site near the old Mayo warehouses. Civil War relic collectors soon discovered threadless insulators at the location, and began to hand dig for more examples. Over a period of several weeks, a sizable quantity of insulators surfaced, primarily 701.6 “Confederate eggs.”

As a result of the burning of Richmond in April, 1865, most examples were melted or destroyed. The insulators were intermixed with bricks and debris from the conflagration. Luckily, a sizable number survived and were recovered by eager diggers.

Historical significance makes these crude relics one of the most desirable insulators in the hobby today. They survived the large fire which occurred in Richmond on April 2-3, 1865, as city residents and government officials fled, and Union forces entered. The bloody war ended shortly afterwards, the Confederate States having lost their capitol city, as well as losing other recent important battles.

Crudely made with an attractive, extremely textured and pebbly surface!

The sharp, thin base remains in spectacular condition... perhaps the nicest I've seen on this type insulator!  The skirt and wire ridges remain in great condition.  A chip on the dome top, starting at the corner, is the size of a penny (at top center of second photo).