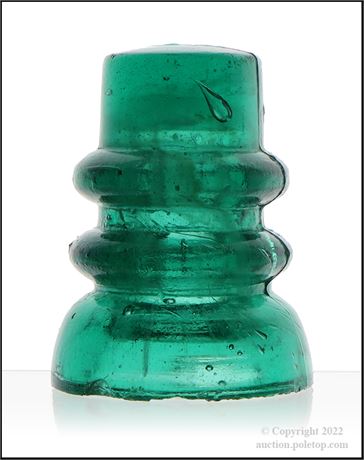 These unmarked, large "pilgrim hat" style insulators have been found almost exclusively on the route of the NY&ERR.

Measuring an impressive 4-3/8" height, this gem has extra thick glass, making it quite heavy.

Milky, opaque strings and patches are present through much of the glass, adding attractive character.  Large, pebbly spot on the upper wire groove is characteristic of all know examples, likely from a defect in the mold, again adding to the "old look" of the glass.

One base chip as shown in the second photo.  Remainder of the insulator is in wonderful, very near mint condition.