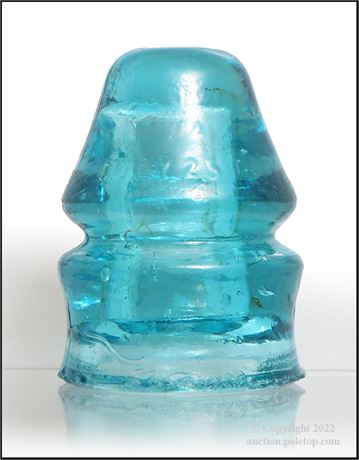 Front dome is embossed with the patent date in large lettering.  Front skirt is marked with small Brookfield lettering.  Numeral "6" on reverse skirt. Dome embossing is mostly readable. Skirt embossing is weakened with some lettering not readable (typical of this type insulator).

The threadless 731 style was a popular insulator design with telegraph companies starting in the mid 1860's, and that popularity continued into the early 1870's.  After the threaded pin concept was patented by Louis Cauvet in July 1865, production of that type insulator began.  The usage transition of threadless to threaded insulators by communication companies took several years.

The embossed Brookfield 731 is more difficult to locate than the 728.4 with Brookfield-1865 marking.