Both have received bids, thus they are now AUCTION ITEMS. 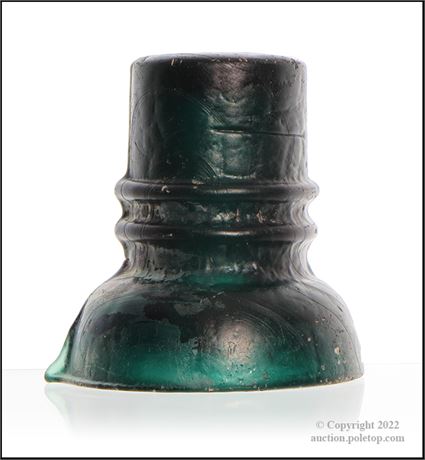 Large "pilgrim hat" threadless insulator in a very attractive dark teal color with green influences.  The excess glass which escaped between the two mold halves when being pressed at the glass factory adds wonderful character.  Amazingly, the "fin" has remained intact for over 150 years!

The large hat style was an early design, dating into the 1840's, and with continued usage into the 1850's and 1860's.  Numerous lines in the South used them, and they are often seen in Civil War era photographs, like the one included above, which depicts an area in the vicinity of Harpers Ferry, Virginia (after 1863, West Virginia).

This relic was found in South Carolina in the vicinity of the a telegraph line route which operated between military installations during the Civil War.

Somewhat of a "rainbow effect" on portions of the glass surface from exposure to the elements for decades, adding attractive character.

Shallow surface flake on the skirt is thumbnail size.  Two smaller, trivial base flakes.  Glass surface is a little dull and a few pinhead / match head marks to a small area.  One of the best condition hats of this type that Pole Top has offered in many years, lacking the typical larger chips.  A beauty!!!!!!