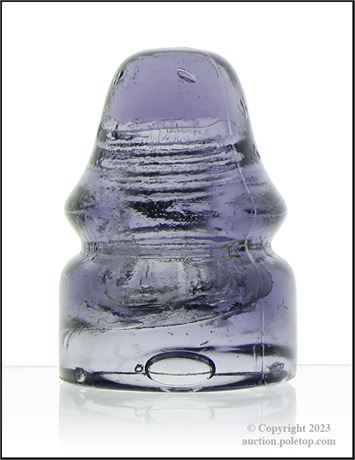 Attractive, sizable bubble in the front skirt is fully enclosed.

Amethyst examples of this early, mold-line-over-dome signal are few and far between.  A small number were found in Mexico decades ago, and a few have surfaced in New England.  It's been many years since Pole Top has offered one for sale.

The consignor located this gem recently, sharing the following information about his discovery:  "I got this last year at a yard sale in Portsmouth (New Hampshire).  An older gentleman got the old family home from his parents.  It was in the window in a barn with a couple of other insulators.  He said his father put them in the window. It was high, so I needed a ladder to get them."

Incredible, shiny condition!  Has a "just made" appearance with only one pinhead flake.  A spectacular beauty!

Update 6:15 P.M. Friday, January 27.  Second photo added showing the front mold half.  Note... there is a bubble in the wire groove and another near the base.  Both are fully enclosed inside the glass.  This may appear like damage in the photo, but is not.  The insulator remains in superb condition!

Embossing on the front is nice.  The rounded contour of the glass surface creates an appearance of weak embossing, but that is NOT the case.

This one has a horizontally elongated "0" on the dome as a the shop number, which is typical of amethyst units.