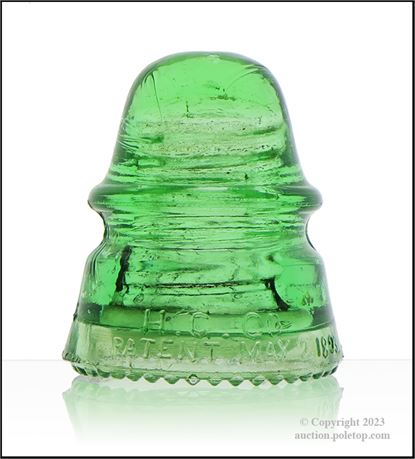 When viewed looking into the base/pinhole of this insulator, the glass is thick.  The extra thickness creates a stronger color density, which is similar to depression glass green, just lighter than larger insulators.

A similarly colored insulator was sold in Pole Top Discoveries Catalogue Auction #73 in December, 2015 as Lot #6062.  It was from the Charlie Allmon collection, and fetched well into four figures.  Charlie's notes about that insulator mentioned it was the only one he had ever seen, and he considered it to be very desirable.

Photo is accurate for color tone, just a little dark.

Clean, shiny surface.  Displays mint from the front.  Faint nibble on inner skirt.  Reverse base has one small chip that removes only one drip point and partially flakes another.   Quite minor!  A beauty!