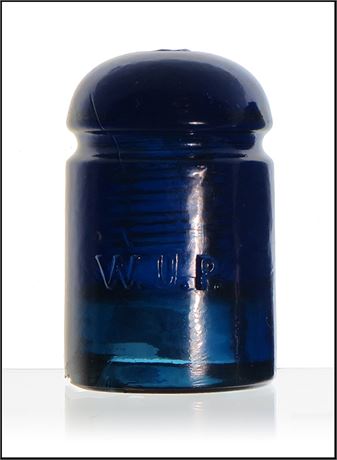 The "W.U.P." lettering represents Western Union Telegraph Company.  This design was their "standard" for a period of time in the 1870's.

Colors of the WUP insulator range from teal toned aqua to dark cobalt blue, with some hues/tones in between.  Four exotic blue examples are known to have been discovered within Ohio, on or near the routes of two separate telegraph lines.  Cobalt blue examples have surfaced at two separate locations in Pennsylvania, and another in Oklahoma.

All colors of the WUP insulators are quite rare, and they are seldom available to collectors.  One of the key pieces in a collection of insulators suspected of having been made in Beaver Falls, Pennsylvania.

Going from memory, this example is likely different than the other three or four "cobalt" examples encountered over the years.  It is darker, and has stronger "ink" tones, opposed to a true cobalt blue coloration.

Missing a portion of the reverse, lower skirt as seen in the third photograph.  This is confined primarily to the reverse, with only a small portion flaked to the front base.  Aside from that damage, the insulator remains very shiny, having only a couple minor (match head) surface blemishes.

Perhaps a once in a lifetime opportunity to purchase a W.U.P., especially one in this color!