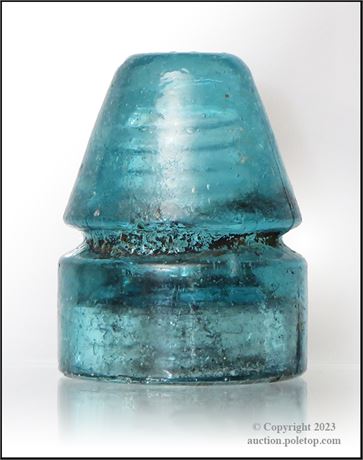 Embossed only with a numeral "2" on top of the flat dome.

These highly sought insulators, referred to by collectors as the unembossed "Paisley bullets," were probably produced by a glasshouse in Beaver Falls, Pennsylvania.

A railroad in western Pennsylvania which used these CD 132.2 insulators, is known to have had a line of telegraph in operation prior to June, 1871.  An article written at that time states "screw glass insulators " were in use on the line, so in all likelihood, it was the "unembossed Paisleys," indicating they were among the earliest threaded insulators produced in America.

Milky, yarn-like impurities meander through the glass, adding character (they show well with bottom lighting).  There's an abundance of tiny bubbles throughout, some which are stretched close to the surface, appearing like miniature silvery icicles in the glass.

One of few examples still existing with the original soot and grime on the surface, left in an original state.