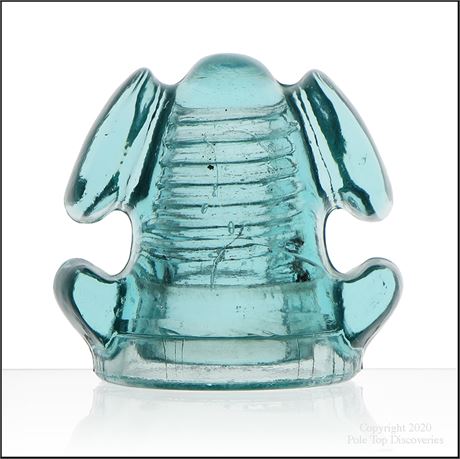 This insulator was originally designed by R.H. Pierce for use in subways on the grounds of the 1893 Chicago World’s Fair.  Numerous crossarms were placed one over the other, with several insulators mounted on each crossarm.  One contemporary article referred to them as the “butterfly” type.  The special design allowed for two wires to be held in place on each insulator.  After the fair was over, demolition crews were sent in, and in all likelihood the Plutos were salvaged and re-sold to other utilities.

Some were installed in the 1890’s on two power lines near Silverton, Colorado, the main source of most in the hobby today.  Two or three were reported found in the late 1960’s or early 1970’s in the Hudson, Ohio area.  Another very small group was found in a factory located in Illinois.  Most recently, three or four have surfaced in the St. Louis Missouri area.

Due to their highly unusual design and scarcity, Plutos remain one of the most desirable insulators in the hobby.

Entire outer area remains sparkling, very, very near mint!  Inner skirt has a surface flake the diameter of a pencil eraser, and a half thumbnail chip, which can be seen to the left portion of the inner skirt in the second photo.  If you've been waiting for an exceptionally attractive and excellent condition "Pluto," here's your golden opportunity to acquire a special example!