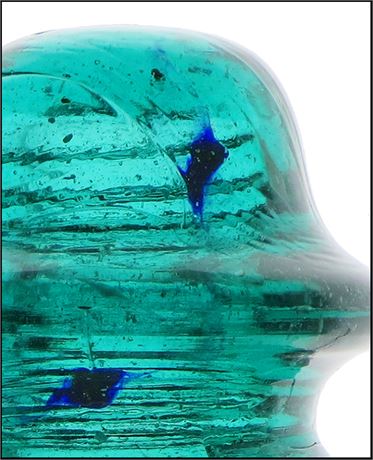 A highly unusual and desirable "Star" insulator with cobalt splotches inside the glass.  Apparently cullet was used to produce the glass batch, and perhaps a couple pieces of a broken cobalt blue bottle were mixed in.  The only example of any type insulator we've heard of with this unusual feature!

The molding techniques and glass characteristics suggest the Brookfield Glass Company as a probable manufacturer.

A couple drip points did not fill out completely, but are not damaged.  Inconspicuous bruise above three drip points.  Two drip points partially flaked,  Two inch+ bruise at the shoulder, below the wire ridge, can be seen in the third photo.  The position and glass contour make it hard to see, so it remains nearly invisible unless tilted at just a certain angle.

Update, 7:55 P.M. Saturday, March 27:  Someone asked for more detail about the condition.  Emphasis once again, that any damage described sounds worse than it actually appears.  Photo 4 is a front view with red arrows pointing to the inconspicuous bruise with red arrows, and three yellow dots below the Star, outlining a nearly invisible base bruise up from three drip points.  Photo 5 is an angled view in an attempt to show the bruise at its worst, once again red arrows pointing to the location in the shoulder area.  Photo 6 is a base view showing the drip points to be in pretty nice condition!