Thanks to Everyone for your interest in Event #2301

Invoices should be emailed by mid day Tuesday 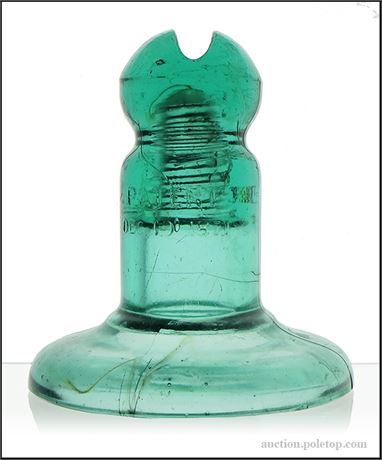 The patent drawing for Josephus Chamber’s August 14, 1877 lightning protection system included a ground cable. However, his advertisements claimed that part of the success of his system is the lack of a grounded rod!

Produced by the Hemingray Glass Company in Covington, Kentucky.

Chambers systems were installed throughout the Midwest, with the heaviest concentration within 150 miles of the Cincinnati/Covington area. Small groups of them have also surfaced in the Erie, Pennsylvania area as well as Western New York State. Some were used as far south as Florida.

The saddle groove at top was formed in a separate mold piece from the body, in a fluctuating position, so the groove does not always line up with the embossing.  This one lines up quite well, with embossing nearly centered under the saddle groove.

Exceptional condition, especially for an insulator of this size!  Remains very near mint.