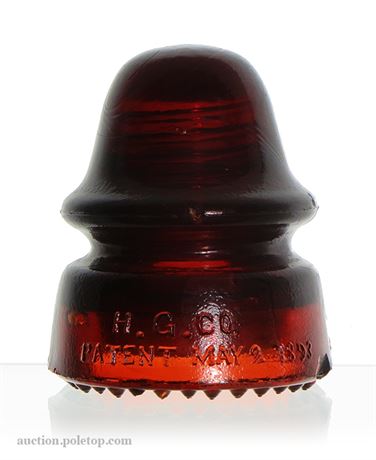 "Oxblood" is a term used by insulator collectors to describe a dark red amber coloration with stronger red tones than is typically seen in amber colored insulators.  They were used on electric lines, some in the Pacific Northwest.  The area of northeast Washington and northern Idaho, especially in the Spokane, Washington and outlying areas, was a "hotbed" of colored signals for early day linemen collectors, including these jewels.

This example has excellent red tones, the glass being well saturated, yet of a density that allows light to pass through all areas of the insulator.  Place this gem in direct sunlight or incandescent light, and watch the red tones come life, hinting at "ruby red" in the well saturated areas.

Pinkie nail chip on the base corner, as seen to the right in photo, removes most of one drip point.  Adjoining, very shallow bruise up from three other drip points.  Seven drip points only partially flaked, most appearing fully intact and only visible when very closely inspected.  Match head blemish on wire ridge.

Update: 2:50 P.M., Tuesday, October 5.  Second image added, showing the base.  Note also the base bruise is above four drip points, if counting the one only partially affected.